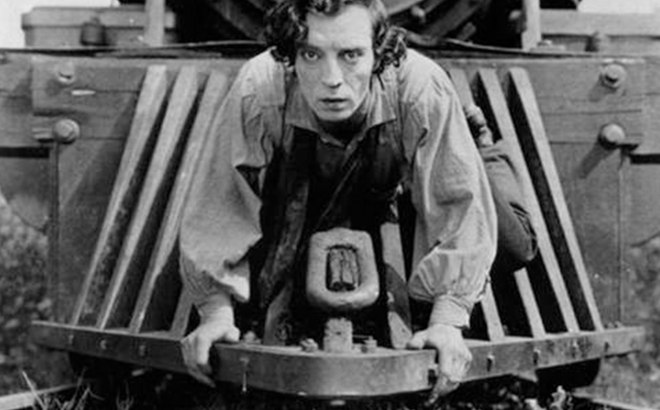 Out of the great silent stars who would willingly and repeatedly fling themselves toward peril, there were none cooler than Buster Keaton.  Though this was considered a part of his act, forever dubbed “The Great Stone Face,” I rather appreciate and interpret Keaton’s stoic stare as the calling card of a man who could keep calm in the center of chaos.

Rest assured, it was chaos, and all of it real.  “The General,” Keaton’s most celebrated work and perhaps one of the earliest great American films, hoisted a then mammoth budget of $400,000.  With a historically accurate reenactment of a Civil War battle, hundreds of extras, expansive sets, and its most iconic shot of a real locomotive crashing off a collapsing bridge and into the ravine below, it was truly an epic of early American cinema.

And while all of these early pioneers and heroes of the motion picture frontier have earned their place in history, the longevity of Keaton’s work is a direct result of that “in control” aura the star so well mastered.  Whereas Charlie Chaplin’s fantastic Tramp character would boast an easy, almost apologetic grin at the messes he got himself into, Keaton problem solved.  His stunts and his comedy, and his work in front and behind the camera all feel modern in this way.

In front of the camera, Keaton plays Johnnie Gray, a proud train engineer with “two loves in his life:” his engine, “The General,” and his fiancée, Annabelle Lee (Marion Mack).  It’s not much later after the couple’s introduction that they learn Fort Sumter has been fired upon, and war has begun.

With the sort of valiance men only harvest to impress their heart’s desire, Gray dashes to the front of the enlistment line for the Confederate Army.  But he is embarrassingly rejected due to his value as an engineer – a fact which no one bothers to tell him – and Annabelle refuses to speak to him until he is in uniform.

Johnny gets a chance to prove his valor, however, once a collection of Union spies hijack “The General,” as well as its unintended patron, Annabelle.  Johnny chases after them, first on foot, and then on handcar, and eventually on another locomotive with little else in mind other than the patriotism no one believed he had.

With a chase set on a railroad, the possibilities for excitement don’t sound too enticing with two big, bulky trains running along the same, prearranged path.  But Keaton uses the limited, set environment to his advantage, picking points along the track to create great silent comic sequences, which he then rehashes once the pursuit goes back the other way.

Keaton’s interaction with the machines themselves make up a majority of the fun, and again, it’s important to know that there was no stunt double.  One sight gag involves a runaway railcar appearing in front of Johnny that he thought he had just gotten rid of, and there’s a daring and impressively extensive scene involving a railway gun.

A moment of artistic perfection occurs after the Union soldiers toss two massive wooden beams onto the tracks in an attempt to slow down Johnny.  Without stopping the train, Keaton runs out and grabs the first, but because the train is still moving, he is thrown on top of the pilot. With an almost unbelievable amount of precision, he tosses the first beam onto the edge of the second, propelling both off the track, and safely continues his crusade.

It’s such a simple moment, but once you think about the dangerous capabilities of it, it makes heroes of both Johnny and Keaton.  And while Johnny may not be fighting for the favorable side (Keaton didn’t think American audiences would relate to a Union soldier as strongly), there’s not a moment in the grips of “The General” where he doesn’t come off as a hero.